Verde Spatial is located along Commonwealth Avenue in Quezon City. This is one of the major roads and highways in Quezon City, which makes this location a strategic choice for this condominium development by Filinvest. Even though Quezon City is one of the most populous cities in the Philippines, it is also one of the most thriving centers in Metro Manila. Hence, it is a dream for many to live in this city as you can have easy access to many major points of interest and landmarks in the metro.

In addition to being one of the major cities in Metro Manila, Commonwealth Avenue is also one of the major highways. The cost of acquiring real estate in this part of Metro Manila is therefore quite expensive. But you are in luck if you are able to invest in your own unit at Verde Spatial. It provides you with easy access to other major roads and highways in Metro Manila while keeping the other destinations within close proximity. It is ideal for those who live or study outside of Quezon City because you can save time on your daily commute. This area is also a primarily residential area so you can expect to find many good subdivisions in the area, too.

Do you love to shop? Looking for a place nearby to replenish your grocery supplies at home? You won’t have any problem with that when you live at Verde Spatial. There are plenty of shopping centers and malls nearby that you can save time traveling to these shops such as Ever Gotesco Commonwealth, Fairview Center Mall, Paragon Place Mall, and Gateway Mall.

Dining out is one of the activities you can enjoy to socialize with friends or spend time with family. If you love to dine out with your loved ones, you can do so with the great selection of dining options near Verde Spatial. You can add the following to your list of options: Love Desserts, Lido Cocina Tsina, Kanin Club, Verena’s Café, and Casa Renato.

For your health needs, you can rest your worries too. There are plenty of world-class options available in the area near Commonwealth Avenue which includes General Malvar Hospital, New Era General Hospital, Diliman Doctors Hospital, and Philippine Heart Center. On the other hand, there are also plenty of good schools available near Verde Spatial. Hence, families who decide to move into this condominium can choose from the following notable schools: Diliman Preparatory School, College of Saint Adeline, Immaculate Mother School, The Seed Montessori School, and Commonwealth High School.

Looking for other leisure attractions and destinations near Verde Spatial? You do not need to travel far in order to enjoy your favorite activities or attractions as you have the following options nearby: Quezon Memorial Circle, Mystery Manila, Petron Amphitheater, Art in Island Museum, Avilon Zoo, Ninoy Aquino Parks and Wildlife Center, and San Diego Gardens.

With the proximity to top destinations and commercial establishments in Quezon City, living in Verde Spatial by Filinvest is a smart choice. You can save yourself from the stress and time of combating the daily traffic in Metro Manila. 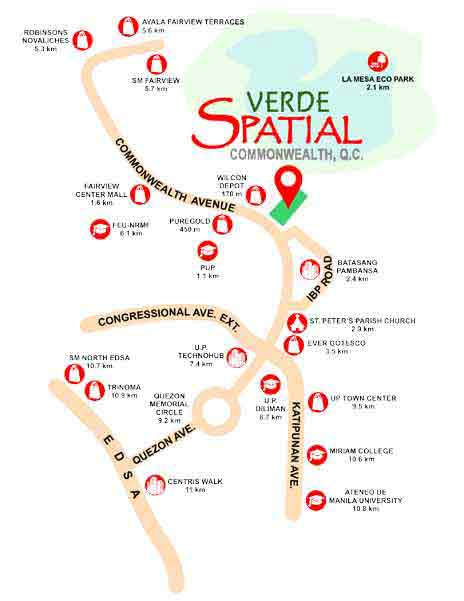